CONVENTS in PIEDMONT and TUSCANY

More content will be added to this page with a selection of Roseman's drawings from the Certosa di Riva, along with a history of the Carthusian nuns, and a selection of the artist's drawings with commentary from the Camaldolese convent of Casa Emmaus, in Tuscany. Please return again.

Stanley Roseman concluded the first year of his work on the monastic life in December 1978 in central Italy with the Benedictine monks at the Abbey of Subiaco, founded in the sixth century by Benedict of Nursia, whose rule called the Rule of St. Benedict is the basis for monastic observance in the Western Church. The artist began 1979 with the monks at the Hermitage and Monastery of Camaldoli, founded by St. Romuald in the eleventh century in the Tuscan-Romagna range of the Apennines.

Monastic life in Italy was again to provide Roseman with inspiration for his work when he was invited in 1982 to draw the Carthusian nuns at the Certosa di Riva, near Turin, in the northwest region of Piedmont. In 1998, the artist's work brought him back to Tuscany, to the Hermitage and Monastery of Camaldoli and to a community of Camaldolese nuns at Casa Emmaus, near the town of Partina in the foothills of the Apennines.

The Carthusian Nuns of the Certosa di Riva

The invitation to Roseman and his colleague Ronald Davis from the nuns at the Certosa di Riva was due to a thoughtful letter of recommendation from the Prior Emeritus Nicholas Barras of the Chartreuse de la Valsainte, the Carthusian monastery in the Swiss Alps where the artist drew the hermit monks. (See the page "Benedictines, Cistercians, Trappists, and Carthusians," Page 4 - "Carthusians.") The solitude of Carthusian monasticism accounts for the relatively small number of monasteries, today numbering twenty-three, compared to the much larger number in the Benedictine, Cistercian, and Trappist Orders. In 1982, the Certosa di Riva was one of only six convents in the Carthusian Order, which dates from 1084. 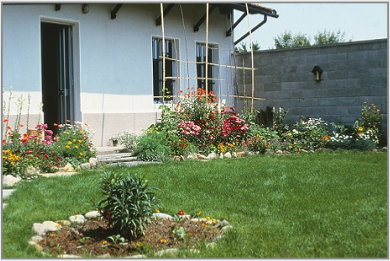 "The general impression of Carthusian monasticism is of a hermit monk living a life of spiritual asceticism and solitude in one of a row of hermitages within the confines of a monastic complex. During the mid-twelfth century, modifications were made to the Carthusian Customs to admit women into the Order.

"Although Carthusian nuns have lived strictly enclosed behind monastery walls, they lived in community as it was thought that women could not endure the solitary life. Following the Second Vatican Council (1962-1965), the nuns of the Certosa di Riva sought and eventually obtained permission from the Order for individual members of the Community to live alone in hermitages as do the Carthusian monks.

2. A Hermitage at the Certosa di Riva, Piedmont, 1982.
The hermitage was one of the first two hermitages
for women within the Carthusian Order. 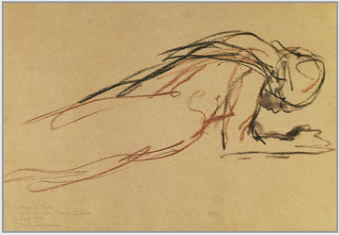 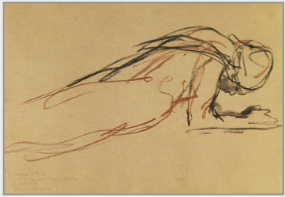 "Stanley Roseman lived in monasteries of monks and nuns of the four contemplative orders
throughout Europe and created an extensive oeuvre of chalk drawings
profoundly expressive of the individual and the interior life.''

Roseman further recounts in his text that one of the sisters, with the Prioress' permission, brought him inside the cloister. "At the far end of the church, by the choir stalls of the Prioress and Sub-Prioress, was a doorway that led into the cloister. We walked through the silent corridor and past nuns' cells, down a flight of stairs, through another hallway, and out a backdoor into the yard of the monastery enclosure. Within the enclosure were six hermitages that were unobservable behind the walls that surrounded each dwelling.''

From Roseman's work at Riva is A Carthusian Nun in Prostration, Musée des Beaux-Arts, Bordeaux, presented at the top of the page and here, (fig. 3). The distinguished curator Gilberte Martin-Mery praised "the beautiful drawing" in selecting this work for the museum.

Roseman and Davis were thoughtfully given accommodations at the Certosa di Riva, in a section of the convent apart from the enclosure. The artist and his colleague's rooms were on the second floor, near the cell of Dom Joseph, a kindly Australian and Carthusian monk in his sixties who was the chaplain and spiritual counselor to the nuns. "At one end of the hall on the second floor," recounts Roseman, "was a small parlor divided by a low wall with the traditional grille separating the nuns from those outside the enclosure with whom they spoke. In the parlor, Ronald and I first met the Prioress Mother Rosalina and members of the Community, who graciously welcomed us to Riva.''

A Gift to the Community at the Certosa di Riva

Roseman and Davis presented to the Community at the Certosa di Riva a gift of the artist's drawings. Included was a drawing of Sister Gabrielle in prostration. The drawing given to the Community at Riva became a related work to A Carthusian Nun in Prostration in the Musée des Beaux-Arts, Bordeaux, when the museum acquired the drawing the following year.

In correspondence, Dom Joseph writes in his letter of June 1982 to Roseman and Davis: "We have so much to thank you for your having wanted to come here and interest yourselves in our life. . . .

"We are very grateful for the beautiful drawings you have left us. They express so much - of what they speak of in themselves - and of those who wanted to give them to us.''

Dom Joseph goes on to say, "The Mother is preparing the notes on the history of the house,'' which Roseman had asked about for the text that he was writing on monastic life and his work in the monasteries. Dom Joseph closes his warm letter:

"Looking forward to seeing you both again, Affectionately, Joseph''

The young nun's humility and devotion to God are vividly expressed in this impressive drawing.

The drawing is rendered in lines of black and bistre chalks, with shading on the young nun's face lowered in prayer as she lies on the floor of her cell. The ochre paper imparts a warm tonality to the drawing. Although Sister Gabrielle meditated and prayed in front of a prie-dieu in her sparsely furnished cell, as Roseman notes in his journal, he composed his drawings with a concentration on the individual.

6. Travels to Sweden and Denmark

3. Historic Regions of Monasticism
in Bavaria and Swabia

On the bottom of this page are links to the other pages.

2. Returning to the Netherlands

7. Convents in Piedmont
and Tuscany

1. A Painting Studio
at the Abbey of La Trappe

Page 2 - Returning to the Netherlands

Page 3 - Historic Regions of Monasticism in Bavaria and Swabia

Page 6 - Travels to Sweden and Denmark

Page 7 - Convents in Piedmont and Tuscany

Page 1 - A Painting Studio at the Abbey of La Trappe