TRAVELS to SWEDEN
and DENMARK

Östanbäcks Kloster, Sweden, summer, 1982.
On the side of the monastery a sign with the word "Skola" reminds one of the building's former function as a country schoolhouse.

Page 2 - Returning to the Netherlands

Page 3 - Historic Regions of Monasticism in Bavaria and Swabia

Page 6 - Travels to Sweden and Denmark

Page 7 - Convents in Piedmont and Tuscany

Page 1 - A Painting Studio at the Abbey of La Trappe

Monks and nuns of the Roman Catholic faith account for the greater number of those following a monastic life in the Western Church. Fostering ecumenicism, Roseman sought to include Anglican and Lutheran monastic communities in his work on the monastic life.

In the summer of 1982, the artist and his colleague Ronald Davis, who wrote to the monasteries to introduce Roseman's work and participated in planning the itinerary, traveled to Lutheran Benedictine monasteries in Sweden and to a Roman Catholic Benedictine convent in Denmark.

In early July, Roseman and Davis arrived at Östanbäcks Kloster, a two-storied, red-painted, wooden dwelling situated among a grove of birch trees on the edge of a woodland near the town of Sala. On the side of the monastery a sign with the word Skola (School) reminds one of the building's former function as a country schoolhouse.

The superior of Östanbäcks Kloster, Father Bengt Högberg, writes in his cordial letter of invitation to Roseman and Davis: "Östanbäck is a Benedictine Monastery within the Church of Sweden and its way of life is based on the Rule of St. Benedict.''

Östanbäcks Kloster was founded in 1970 by Father Bengt and three other Lutheran ministers aspiring to establish a monastic community in the Church of Sweden. 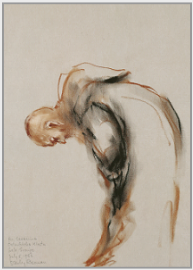 "The continuity of the Swedish Church with the medieval Church and the Church of the Apostles is never officially questioned. There was no formation of a new Church. So religious life is to be considered as old as the Church and Christianity in this country.''[1]

Presented here is Roseman's Portrait of Father Bengt, 1982. The impressive portrait drawing, rendered with chiaroscuro modeling in chalks on gray paper, was a gift from the artist and his friend to the monastery in appreciation for the gracious hospitality and encouragement of their work they received from the monks.

As Roseman was writing a text on monastic life and his work in monasteries to accompany his paintings and drawings, Father Bengt thoughtfully provided the artist with a summary in English of the discourse he gave in 1973 at the Conference on the Religious Life, arranged by Societas Sanctae Birgittae in Vadstena.

Father Bengt states in his paper:

Father Bengt relates that the first missionary period in Sweden dates from 830, when the Benedictine monk St. Ansgar and a fellow religious named Vitmar came to Birka. By the twelfth century, a Benedictine Abbey was founded in Lund, and a century later, Cistercians were well-established in Herrevad, Alvastra, and Nydala.[2] 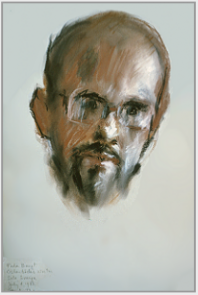 The Teyler Museum had previously acquired Roseman's drawings from monasteries in England, Ireland, and France. The drawing of Brother Caesarius entered the museum with the artist's drawing of the Benedictine monk Father Damian, who spent many years in the missions and had returned to the Archabbey of St. Ottilien, in Germany. (The drawing is presented on the page "The Monastic Life," Page 3 - "On the Continent to Belgium, the Netherlands, and Germany.")

The Chief Curator of Prints and Drawings, Carel van Tuyll, writes in letter to Davis, who had introduced his colleague's work to the museum:

"The two splendid drawings arrived safely and have now joined their fellows.
Both 'Brother Caesarius in Choir' and the 'Missionary Monk, St. Ottilien'
fully lived up to expectation and we are proud
that we are now able to show such a rounded and representative group
of Mr. Roseman's drawings in the Teyler Museum.''

This eloquent drawing was acquired in 1986 by the Teyler Museum, in the Netherlands. The museum houses a renowned collection of master drawings from the Italian Renaissance, including sheets by Michelangelo and Raphael, as well as from the seventeenth-century Dutch School, notably drawings by Rembrandt.

More content will be added to this page with a selection of Roseman's drawings from Östanbäcks Kloster and the Lutheran Benedictine convent of Östra Sönnarslövs Kloster, which includes the drawing Sister Elsa in Choir, 1982, in the New Orleans Museum of Art.

From Roseman's text is a description of Östanbäcks Kloster: "The former country schoolhouse was renovated to accommodate a small monastic community. The classrooms on the second floor were transformed into living quarters with cells for the monks; facilities on the first floor were appropriated for a refectory and kitchen, and a large room off the entrance hall was refurbished for use as a chapel, with white walls; individual, rectangular, wooden choir stalls; a lectern; and three icons on the wall behind the altar.''

Roseman drew the Benedictine monks praying and chanting the Psalms at the Divine Office in choir, meditating and studying, and taking their meals in the refectory. The drawing Brother Caesarius at Breakfast, with several Roseman drawings on monastic life, was acquired by the Institute of Art History, Leiden University, for its outstanding collection of master drawings. The excellent drawing from Östanbäcks was also shown at the Albertina, Vienna, in 1983, in the exhibition Stanley Roseman - Zeichnungen aus Klöstern (Drawings from the Monasteries). The drawing is reproduced on the page "Stanley Roseman - Exhibition at the Albertina.''

1. Bengt Högberg, HKB, "Religious Life in the Church of Sweden," Summary of a paper given by the author
at the Conference on the Religious Life, Societas Sanctae Birgittae, Vadstena, 1973, p. 1.
2. Ibid., p. 1.

The present work, beautifully expressed in transparent tonal passages of black and bistre chalks with linear accents on gray paper, depicts Brother Caesarius in his voluminous cowl. Touches of white chalk add highlights on the face of the bearded Benedictine monk bowing in prayer as he recites the Gloria Patri. 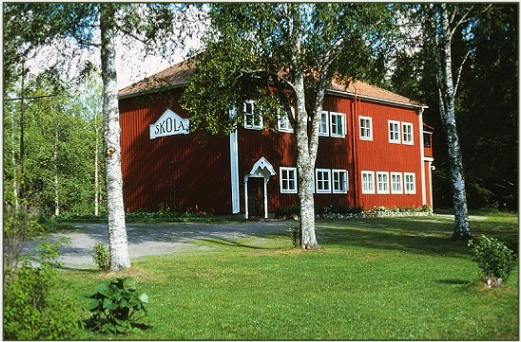 6. Travels to Sweden and Denmark

3. Historic Regions of Monasticism
in Bavaria and Swabia

On the bottom of this page are links to the other pages.

2. Returning to the Netherlands

7. Convents in Piedmont
and Tuscany

1. A Painting Studio
at the Abbey of La Trappe